Sometimes I work in an environment in which software access is restricted.  Things like Wireshark are DEFINITELY not allowed.

However, I'm still expected to troubleshoot network connectivity issues.  Luckily, tcpdump exists in the EPEL Repo, but leaves much to be desired when trying to read the PCAP files.  I decided to read up on the PCAP spec, and create my own parser in bash.  Crazy? Maybe.  But, it does work.

Another nice capability here is that using something like vim, you can easily tweak this script to dump application data for further debugging.  For example, switch your HTTPd to run in Non-SSL, run a capture, and dump the application data.  Of course, you may have to work out the correct byte offset for your packets. As this is a bare minimal implementation of a pcap parser and does not nearly support the full scope of capability provided by libpcap.

The real issue here is that I have not taken the time to parse some flags which consist of single bits.  There is also much work to be done in regard to writing the conditionals for various Ethernet, IP Routing and TCP frames.  But this is a good baseline to start.

To use this script just run 'tcpdump -w file.pcap -X' to run a capture.  Once done, pass the file as an argument to the pcap-analyzer bash script, and you will be able to read your frames on the CLI!  This should work out of the box with Centos/RHEL 6 Minimal, with the addition of the tcpdump RPM.

Here is a screenshot. 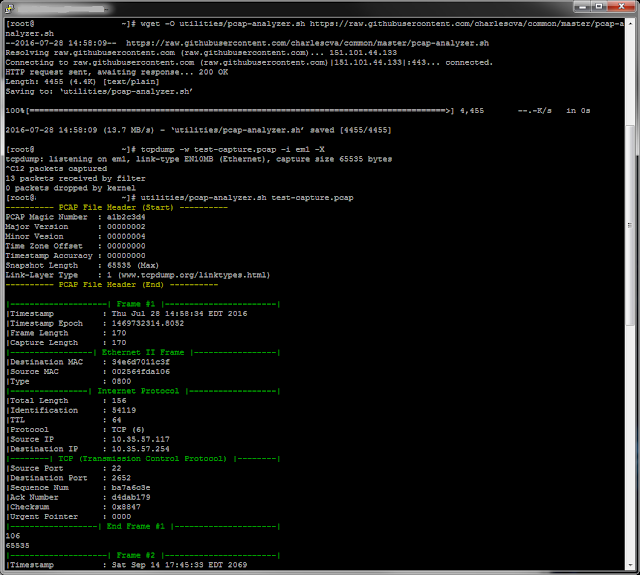 As you can see frame 2 starts to break because of the parsing.  Some flags actually mean, the header is going to be 28 bytes instead of 26.  As a result of the byte variations, the byte iterator ends up on some obscure part of the stream I don't handle, and things get start to break.  Git forks are welcome if you like this little utility and are interested in making it more robust.

One final important characteristic about Ethernet wire data is that it is ALWAYS Big Endian.  This is confusing because most CPUs are little endian.  To work around this issue, I use both 'hexdump' and 'od' because one enforces big endian while the other is CPU dependent.

Posted by Champion Of Cyrodiil at 12:22 PM No comments: