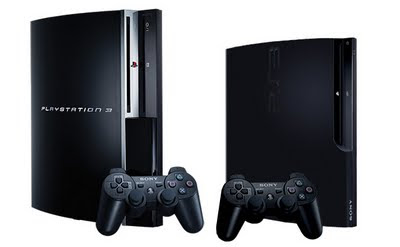 My PS3 was purchased around Christmas in 2007. I remember when I was deployed earlier in '07 to Djibouti with the Marine Corp. and one of the Marines in my tent was able to get his hands on a PS3. I thought this system was amazing and had a beautiful shiny black and chrome chassis. The graphics were amazing and I was thrilled to be getting my hands on the new Metal Gear Solid: Guns of the Patriots.

Since I got my PS3 my Xbox 360 started collecting dust. All the newest games I purchased were for the PS3. Using my common sense I assumed that the PS3 had newer hardware, thus would run newer games faster and with better graphics than the Xbox.

Sony finally decided to stop production on the expensive 'Fat PS3' and started making a cheaper product with newer technology and a slim case. These electronics are supposed to be smaller, run cooler and make more efficient use of the electricity they require.

Recently I have purchased 2 games that have been causing my "old" PS3 to freeze. Battlefield: Bad Company 2 & Red Dead Redemption. I actually purchased both games at the same time from Amazon.com. Since the recent freezes with these games, no other games cause my system to freeze. However these games still occasionally lock up. Red Dead Redemption locks up so often it is unplayable, however Bad Company 2 seems to go through a fit in which it locks up many times in one hour, yet not at all for other weeks on end. The game seemed to freeze more often when playing online. When looking online at Amazon reviews, I have noticed that others with this older system tend to have newer games lock up more and more often. Especially with L.A. Noire. (Rockstar titles seem to be full of fail lately)

I understand that older hardware eventually falls apart, as the circuits begin to develop oxidation and the alloys become degraded providing poor conductivity of electrons. However I have taken great care of my PS3, ensuring to package it in original box with Styrofoam each time I move it (3 times total). So why is my system which will be 4 years old this December freezing with newer games only?

My theory is that these more graphics intensive games that everyone is demanding require pushing the hardware of the PS3. Thus, your older system will overheat, since the hardware is not as efficient as the newer PS3. So why don't we old PS3 owners all go out and buy the newest PS3? One good reason is because money doesn't grow on trees like it does at Sony's Headquarters. Another is because we enjoy playing PS2 titles on the same system. Also we paid full price for this system when it first came out, supporting the efforts of Sony to compete with Microsoft's Xbox 360. And this is how we are treated by Sony's Quality Assurance Team? The idea of maintaining compatibility between hardware revisions must have slipped the minds of their development team. Also I highly doubt Rockstar's Test team is testing their software on an expensive system that does not exist anymore.

After the recent exploitation of my personal information via Sony's Online services coupled with the lack of product support and maintaining compatibility, I will no longer be purchasing products from Sony. Also the remote for my Sony surround sound system cannot be programmed to turn my TV on/off unless its a Sony TV. (according to the manual that came with the surround sound system.)
Posted by Champion Of Cyrodiil at 5:42 AM